Keep Your Business Healthy: Meet with Your CPA Regularly

Highlights of the 2022 Fall Economic Statement and Announcements by Finance

Canadians Working Outside the Country 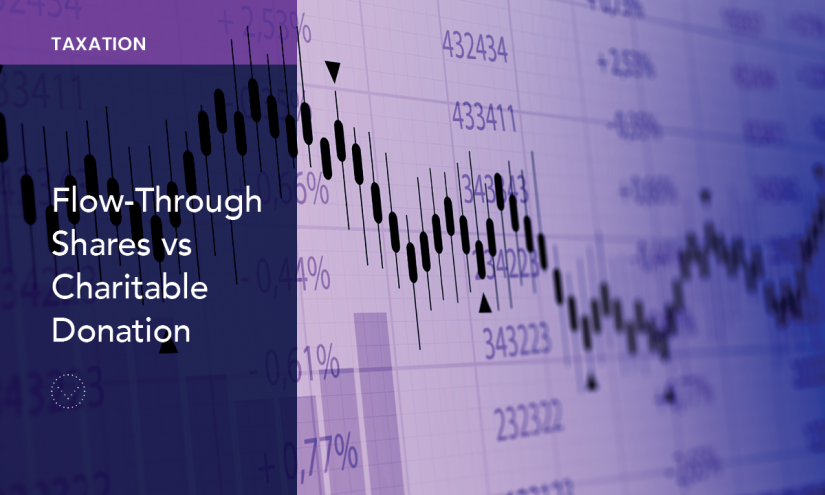 Looking to help out a charity dear to your heart and maximize your tax credits while doing your good deed? There are a number of things to consider. First, your income. People with higher incomes and therefore higher tax brackets may want to consider a riskier investment.

Flow through shares (FTS) are a more complicated method of giving to a charity, but they may offer a much higher benefit to your bottom line. FTS support exploration in Canadian oil & gas, mining and renewable resource companies. While exploration can be a volatile investment, the pay-off may well be worth the risk, depending on your individual financial situation.

Donating FTS can have multiple tax benefits for the donor, while supporting exploration and your favorite charity. Here’s is a little information on how it works:

Junior exploration or mining companies usually have very little income but generate extensive expenses. They can “renounce” a portion of their expenses to you that you can then claim on your taxes. You would then carry these shares in their company for 18-24 months before you sell or donate. In riskier investments it may be possible to effectively donate soon after the purchase of the flow-through shares. If you decided to sell, you would be facing a capital gain, but if the shares are donated to an eligible charity you stand to substantially benefit from the gift.

Let’s look at an example: If the investor in the top Quebec tax bracket (varies slightly from province to province) was to purchase $92,999 in FTS, he or she could have a net after tax cost of making a donation of shares of a little over 18% of the net amount the charity receives of $44,384.

In this particular example, the proceeds of sale of the donated shares to the end buyer is $51,681.

It also takes into consideration the federal capital gains tax payable upon the donation of shares and various fees that could be charged. It’s important to remember that while this may sound like a really good deal, there is a reason for that— there is a much higher risk involved and the mechanics depend on overcoming tax technical hurdles.

The actual after-tax cost would be different in each case depending on the investor’s tax situation and considerations include alternative minimum tax, the federal and provincial tax credit rates for donations, and a special capital gains offset that may be available for Quebec taxpayers. 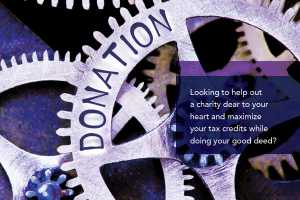 Traditional Charitable Donations
For those looking for a safer way to support your favorite cause, while saving money, a traditional donation may be right for you. First, calculating your savings is a much simpler process to understand. If you donate $200 or less, your federal tax credit will be 15%, and for donations in excess of $200, your credit will be 29%. Under certain rules, if you are in the highest tax bracket, you may get up to as much as a 33% credit. Each province has their own charitable tax benefit that will also give you a credit.

Let’s take the same cash donation to the charity of $44,384 which is the net proceeds received by the charity in FTS example we looked at:

Depending on your individual financial situation it may or may not be better for you to combine your donations with your spouse’s donations. It can also sometimes be worthwhile to accumulate your eligible donations for up to five years and use them all in the same tax year.

Please note that this article is a general overview of a comparison between donating flow-through shares and a traditional cash charitable donation. As always, for more detailed information on what works best for your individual situation, contact your SLF adviser.